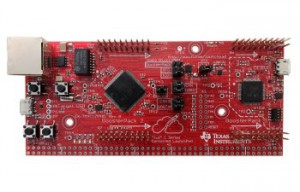 Old arm board I was using to monitor my storage temperature broke. As I didn’t have any similar boards in my piles any more, I decided that this would be a great opportunity to try something more modern instead. New board should be using a Cortex-M3/M4 CPU, have ethernet controller on board and a few GPIO pins for 1-wire interface. At the end I had two choices: either Olimex STM32-E407 or Texas instruments Tiva Connected Launchpad.

I had earlier ported Pico]OS to Tiva Launchpad, but I still had some problems in getting simple blink-a-led stuff running. I finally found out that chip on this board requires different clock setup than the one on simpler launchpad (one must call SysCtlClockFreqSet instead of SysCtlClockSet & SysCtlClockGet). The basic uIP driver for ethernet was provided as an example with tivaware and it was very easy to adapt it from there into picoos-net library.

I refactored by existing sensor-web project quite heavily by moving all board-specific stuff into separate subdirectories, hoping that project wouldn’t look like a big mess after adding new board (it now supports old Olimex LPC-E2129 arm7 board, Tiva launchpad and unix for testing). As Tiva board has more RAM than old board, it was possible to allow more concurrent tcp/ip connections, which makes the web browser interface to work a lot better than with just 2 connections.

I put the board into plastic box today and moved it into storage room. Temperature trends from it are available here.