One day my old trusty Behringer REV2496 reverb processor refused to start up any more. It just sat there all possible leds lit doing nothing. Being unhappy about this I left it there and started thinking about some new device to replace it. The poor device must have seen me browsing thomann’s effect processor catalogue as it decided to start eventually after warming up.

Ok, this is not an expensive, high quality audio processor, but I must admit that I have grown to like it during the years I have had it. There are some nice reverbs on it and it has also very good connectivity (optical, analog, aes/ebu). Because of this I decided to attempt repairing it. 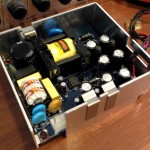 After opening it was easy to see that there was a separate power supply unit (shielded by aluminium) that could be the cause of problem. There were some electrolytic capacitors on it that looked a little bit swollen.

As it looked that device worked OK after warming up I decided to try if cooling the capacitors would make the problem occur again. I bought a can of cold spray from local Biltema and started experimenting. 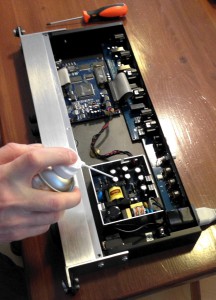 And indeed, when cold spray was applied to capacitors the unit stopped working.

All capacitors didn’t look swollen, but I decided that it might be wise to replace them all as the cost is rather marginal and I had to dismantle to power supply anyway. It was a little bit difficult to see types of all capacitors since I didn’t want to unsolder the parts before I had new ones (as I could easily forgot where each capacitor was).

I ordered new capacitors from electronics parts shop. After the parts arrived, I took the power supply away from unit and removed the aluminium cage to be able to unsolder capacitors.

After that, the actual capacitor replacement was quite easy. I put the power supply back into unit and powered it on again.

And guess what ? It worked flawless again!